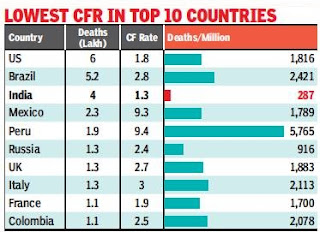 India became the third country to report more than 4 lakh Covid deaths after the US and Brazil. Apart from these, Mexico is the only other country to have registered more than 2 lakh deaths.

In 10 countries, more than one lakh people have succumbed to Covid or related complications. With 6 lakh deaths, the US is at the top of the list followed by Brazil (5.2 lakh), India (4 lakh), Mexico (2.3 lakh) and Peru with 1.9 lakh fatalities. The others with five figure death tolls are Russia, the UK, Italy, France and Colombia.

Among these countries, the ratio is highest for Peru, which has seen 5,765 deaths for every million of its population. For Colombia, Italy and Brazil, the other three countries that have seen over a lakh deaths so far, the death per million ratio is over 2,000 but less than 3,000. India’s case fatality rate (deaths per 100 infections) is 1.3, which again is the lowest among these countries.

When compared to other large Asian countries (both economy and population) and its neighbourhood, however, India’s death per million ratio is among the highest. Except for Nepal, which has seen 308 deaths per million of its population, most of these countries have a lower ratio than India. The Philippines and Indonesia are the only other countries where this ratio exceeded 200. The ratio is160 for Malaysia,143 for Sri Lanka and 122 for Afghanistan. It is less than 100 for Pakistan, Bangladesh, Myanmar and Thailand. In case fatality rate, India is better than most of these countries, but Sri Lanka, Thailand and Malaysia have even lower CFR. 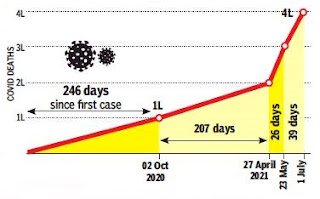