A Five-Year Plan To Restore About 1.4k Acres Of Aravalis 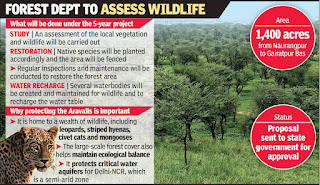 The forest department is planning a conservation programme to restore the natural habitat of the Gurgaon Aravalis. Around 1,400 acres of forest land between Naurangpur and Gairatpur Bas will be restored over five years.

Under the programme, the department will first carry out an assessment of the local vegetation and wildlife. Saplings of native species will be planted accordingly and the area will be fenced. Teams will carry out regular maintenance and inspections to protect and reinstate the forest cover, officials said. Water bodies will also be restored or developed for wildlife, which will also give a boost to groundwater recharge.

The project is in the planning stage at present, officials said. “The proposal has been sent to the Haryana principal chief conservator of forests for approval. After it is approved, we will invite expressions of interest for the preparation of a detailed project report,” Gurgaon divisional forest officer Rajeev Tajyan said.

This project is vital for Delhi-NCR because since the 1990s, the Aravalis have been shrinking due to their proximity to the densely populated urban clusters of Gurgaon and neighbouring areas, which has led to rampant illegal construction, deforestation and mining.

Due to the fragmentation of the natural habitat by roads and an increase in traffic, the number of wildlife roadkills has gone up during the past decade, as well as leopard-human conflict incidents. Moreover, the forest area is declining due to pressure from fuelwood collection and cattle grazing.

Forest officials said the habitat restoration plan will provide safety to the wealth of wildlife found in the Aravalis. A survey carried out over 2019 and 2020 by wildlife researchers supported by Centre for Ecology, Development and Research and WWF-India had found that the unprotected forest tracts in the Gurgaon and Faridabad Aravalis harbour a rich variety of mammals, more than Asola Bhatti, the contiguous tract in Delhi that enjoys the status of a wildlife sanctuary.

During the survey, striped hyenas, leopards, black-naped hares, Indian crested porcupines, small Indian mongooses and golden jackals were found to have healthy populations in Gurgaon. The encounter rate of leopards is 2.7 per km in the Gurgaon Aravalis compared to1.4 in the Asola sanctuary, it had revealed.