Kelve: Volunteers come together to save the beach 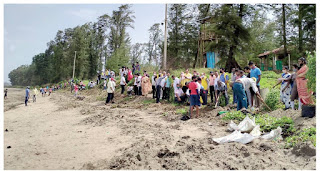 Hundreds of local people came forward and started a tree plantation drive “Come let’s plant a tree, save our nature, for us” on Friday to restore the original beauty of Kelve beach and prevent soil erosion.

More than 400 volunteers, including students of Dandekar College and Nanasaheb Dharmadhikari Pratishthan and residents of Kelve village, are working under the aegis the Kelve Environmental Conservation Board, which was recently formed by volunteers.

“Under this drive, around 1,300 trees will be planted. The work will be completed by next week,” said a volunteer who is actively participating in the drive. He said in the first phase, Conocarpus, a type of seaweed, was planted on Friday.

Conocarpus and Barringtonia Acutangula also known as Samudraphala survive on brackish water, occurring in a natural environment having more salinity than fresh water, but not as much as seawater. One unique property of these plants is that they hold the sand compactly. Samudraphala is also known for its medicinal properties. Similarly, the sea breeze has no unpleasant effect on the trees.

Prathamesh Prabhutendolkar, additional secretary Kelve Paryavaran Savrdhan Mandal who is also a member of the newly formed Kelve Environmental Conservation Board,” said, “We started the special drive with the aim of restoring the natural beauty of the beach. We will be planting Conocarpus and Samudraphal trees.”.

“Kelve is famous for its beautiful beach greenery. But in the last 4-5 years, there has been the destruction of trees caused due to strong winds, almost half of the pine tree garden was uprooted. We started collecting Rs 500 per tree under the scheme, “It’s a golden opportunity to adopt a plant of our own” from local donors,” said Prathamesh, adding that keeping in mind the biodiversity of the area, this is a revolutionary project undertaken by local people.

Kelve, the third local train station from Virar, comes under the suburban train network of the Western railway. It is a small village in the Palghar district, around 109 km away from Mumbai. The village is situated on the Arabian sea coast surrounded by lush green forests, cool winds, and tall palm groves.

This small village is famous for its beautiful beaches, Suru (Cypress) Garden on the beach, Goddess Shitala Devi Temple and greenery all over the village. The Suru garden here was completely got destroyed in December 2017 by Ockhi Cyclone with strong winds.

After the extension of the suburban network up to Dahanu by the Western railway, Kelve becomes one of the favourite picnic spots of the residents of the Western suburbs of MMR.