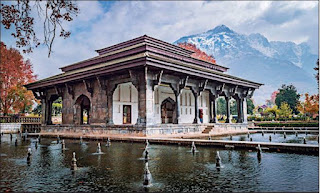 The celebrated Mughal Gardens that have been a metaphor for ‘paradise on earth’ through the ages are poised to find a fresh lease of life and a Unesco world heritage tag if things go as per plan.

The J&K government signed an MoU with JSW Foundation (the social development arm of JSW Group) last week for the “conservation, restoration and maintenance” of two of its imperial gardens — Shalimar and Nishat Bagh — led by conservation architect Abha Narain Lambah. Planned as a 36-month restoration project, Lambah is steering a multidisciplinary team of historians, architects, conservationists and horticulturists to prepare a blueprint of the restoration work.

Meanwhile, a Unesco nomination dossier for all six imperial gardens in Kashmir — Chashme Shahi and Pari Mahal Bagh in Srinagar, and Achabal and Verinag Bagh in Anantnag — was prepared by Lambah and submitted by the J&K government to the Centre in January for inclusion in the world heritage list for 2021.

“A project monitoring committee will be appointed with representation from the government of J&K and our foundation. We will undertake detailed surveys to produce drawings and take up field research. Work will first begin at Shalimar Bagh site followed by Nishat Bagh site as a pilot project to demonstrate best practises for the conservation of these gardens,” said Sangita Jindal, chairperson of JSW Foundation.

Built in the first half of the 17th century during the reigns of emperors Jahangir and Shahjahan, these ASI-protected gardens were laid not as a backdrop or foreground to tombs and palaces but as open air salons and cultural spaces for imperial audiences and courtly ceremonies. While 700 such “pleasure gardens” that had flowered across the valley — fed by mountain springs — were abandoned, destroyed, transformed or vandalised over time, the six surviving gardens remained in continuous use for four centuries as a retreat where jaded visitors would come to regain their health, poets and painters would find inspiration, scholars would joust and families still gather for picnics.

The most exemplary of the imperial gardens are the two picked for the pilot project. The Shalimar Bagh — on the far end of the Dal lake and in the lap of the Zabarwan mountains — remains emperor Shahjahan’s first garden commissioned in 1619. Nishat Bagh was a more private garden than its neighbour, Shalimar Bagh, which was also used for holding royal durbars.

Lambah stressed on the need to sustain the historic features of the Mughal Gardens like its abshars or stone fountains, authentic Kashmiri flora, painted ceilings, artworks and unique hydrology.