Man with the Golden Arm 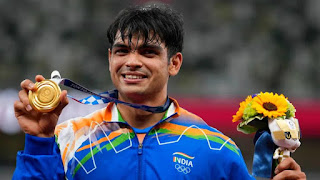 Neeraj Chopra on Saturday made history by becoming the first Indian to win gold medal in athletics at Olympic Games when he clinched first position at Tokyo 2020 with a throw of 87.58 metres in javelin competition.

Chopra has also become only the second Indian after Abhinav Bindra to win an individual gold medal at the Olympics. Bindra had won gold at the 2008 Olympics in shooting.

The 23-year-old Chopra now holds gold medals in javelin throw at the Commonwealth Games, Asian Games and Olympics, all at the same time.

Chopra’s gold means India, with seven medals at Tokyo Games, have surpassed the tally of six medals won at 2012 London Olympics. This is the biggest tally of medals won by India in a single edition of Olympics.

Both got their season’s best throws on their fifth and third attempts respectively.

After finishing first in the qualification round on Wednesday with a throw of 86.59m, Chopra continued his impressive performance in the final on Saturday, recording a first throw of 87.03m.

He followed it up with 87.58m in his second attempt. It turned out to be the best throw of the night.

The 23-year-old’s third attempt was well below the 80m mark at 76.39m. He followed it up with two fouls on his fourth and fifth throws. His last attempt was 84.24m. By then, however, the inevitable was confirmed as the other competittors couldn’t match his best throw.

World No. 1 Johannes Vetter of Germany, a favourite to win the gold alongside Chopra, continued his rough form from qualification to the final and was ousted after the initial three of the six throws. The 28-year-old, who came into the Olympics after seven massive throws of over 90m between April and June, opened with 82.52m.

But fouls on the next two throws meant he finished ninth and crashed out of the competition as only top eight progress. During his second throw, Vetter happened to injure his ankle too.

The other Asian thrower in the final, Pakistan’s Arshad Nadeem finished fifth with his best throw coming in his third attempt at 84.62m.