More Chirag Dilli-Like Model Stretches May Have To Wait 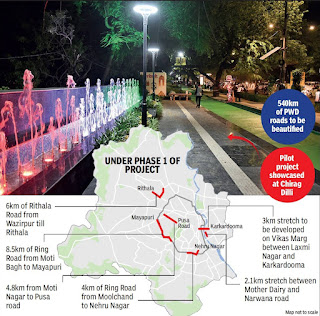 The Public Works Department’s much delayed project to redesign key city streets and bring them at par with European standards looks set to face another hurdle. After examining the new proposals on interventions like additional bicycle lanes and walkways, the traffic police have asked PWD to submit detailed plans of the changes specific to high traffic corridors.

PWD recently inaugurated a 700-metre pilot stretch near Chirag Dilli, an exercise that will be replicated across 540km of PWD roads with street space wider than 100 ft. A PWD official disclosed that work on some more segments had also been initiated. “The work on streetscaping a 4-km portion between Moolchand and Nehru Nagar has been started and footpaths, cycle tracks and greenery will be developed there,” the official said. “At some of the sites, traffic police have their reservations and have sought details of the site-plans and drawings to study them.”

Traffic police officers have objected to the width of new lanes being developed, apprehending traffic jams because of them. “We don't have any issue with PWD wanting to develop and beautify the roads. Our concern is with the road width and its possible reduction,” said an officer. “The volume of traffic on the roads is increasing by the day and if the size of the roads is reduced, it will only add to more problems and impede smooth movement. We have asked PWD to let us have a look at their plans to check if any structural change is being made….

Some traffic police officers stated that in the preliminary discussions, they had informed PWD that while it shouldn’t alter the width of the road when carrying out its revamp.

PWD plans to carry beauty11 key corridors. In the first phase, work on this is taken up on the 3-km stretch on Vikas Marg between Laxmi Nagar and Karkardooma, 2.1km Mother Dairy-Narwana Road, 4km of Ring Road from Moolchand to Nehru Nagar, 6km of Rithala Road from Wazirpur to Rithala, 8.5km of Ring Road from Moti Bagh to Mayapuri and the 4.8km section from Moti Nagar to Pusa Road.

“Each beautification segment requires specific interventions and features, with some common elements such as bicycle tracks, pedestrian friendly infrastructure, street furniture, designer benches and statues. A three-level greening is also being attempted with shrubs and trees,” official said, adding that the agency had also put the completion of the repairs near the Lajpat Nagar flyover on a priority.”