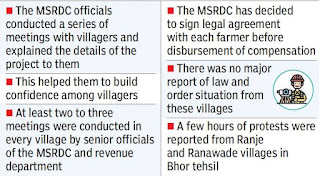 The Maharashtra State Road Development Corporation has completed 94% of the land survey work for the proposed 68.8km western ring road project. The remaining work will be completed by August 15, said officials.

The road development agency has so far surveyed 655 hectares of the 695 hectares of land required for the project. It couldn’t carry out the survey in four villages — two each in Bhor and Mulshi tehsils — due to opposition by the villagers.

“The protesting villagers have sought a change in the ring road alignment. The matter has been placed before the district administration, which is likely to hold a meeting with the villagers and local politicians,” said MSRDC executive engineer Sandeep Patil.

“Village-wise drawings of the ring road are being prepared based on the land survey. Drawings of 33 villages will be prepared soon,” he added.

“The valuation of the land will be done based on ready reckoner rates. Besides, we will also value properties included on the land. So, farmers will get monetary compensation pertaining to each of their properties,” said Patil. As per the procedure, the MSRDC will sign legal agreement with each farmer before disbursing compensation. “Our endeavour is to complete all administrative work by February 2022,” Patil added.

“Land survey is the toughest task for any project. It was done in a very smooth manner with a single police complaint. Barring small protests at two villages in Bhor tehsil, we did not face any issue in 33 villages,” Patil said.

The western ring road will start from Urse toll plaza in Maval tehsil. Then it will pass through Mulshi, Haveli tehsils before connecting Mumbai-Bangalore highway at Bhor tehsil. Patil said that they were in the process of commencing land survey for eastern ring road as well.