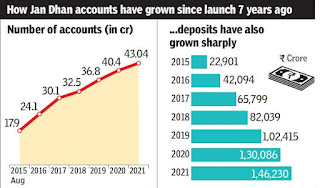 The Centre said it had communicated to banks about the plan to ensure coverage of Jan Dhan account holders under various micro insurance schemes while PM Narendra Modi said the government’s financial inclusion initiative had transformed the country’s development trajectory and helped deepen transparency. A finance ministry statement said eligible Jan Dhan account holders will be sought to be covered under PMJJBY (Pradhan Mantri Jeevan Jyoti Bima Yojana) and PMSBY (Pradhan Mantri Suraksha Bima Yojana) and banks have already been informed about this plan.

It also said there are extensive plans to promote digital payments, including RuPay debit card usage, among these account holders by creating acceptance infrastructure.

Improving access of PMJDY account holders to micro-credit and micro investment such as flexi-recurring deposit is also being planned, the statement said, while referring to future plans for the Jan Dhan account holders.

The PM lauded those who had worked to make the Jan Dhan scheme a success, saying their efforts have ensured that people lead a better quality of life.“On Saturday we mark seven years of #PMJanDhan, an initiative that has forever transformed India’s development trajectory. It has ensured financial inclusion and a life of dignity as well as empowerment for countless Indians. Jan Dhan Yojana has also helped further transparency,” he tweeted.

There has been a sharp increase in Jan Dhan accounts since the scheme was started. As on August 18, the number of total PMJDY accounts were 43 crore and 55.5% (23.9 crore) Jan Dhan account holders are women and 66.7% (28.7 crore) are in rural and semi-urban areas. “The journey of PMJDY led interventions undertaken over a short span of 7 years has in effect, produced both transformational as well as directional change thereby making the emerging financial inclusion ecosystem capable of delivering financial services to the last person of the society-the poorest of the poor,” finance minister Nirmala Sitharaman said.