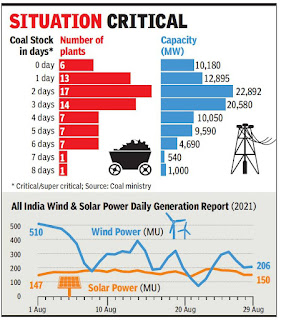 The government has allowed the Tata and Adani groups to sell electricity from idle capacity at their imported coal-based plants in Gujarat on energy exchanges for a month to check the spike in power prices triggered by coal shortage in 73 generation stations.

But even as the government is grappling with the crisis at power plants, aluminium manufacturers have joined the chorus on fuel shortage at their captive generation units. In letters to pertinent officials, the Aluminium Association of India has alleged “drastic curtailment” of the contracted supplies by Coal India Ltd — perhaps because they were being diverted to mainline generation stations.

In the meantime, officials said orders under provisions of the Electricity Act will be issued, asking Tata Power and Adani Power to fire up 4,400 MW capacity at their Mundra plants idling because the buyer states refused to compensate for the increased cost of imported coal. The permission to sell power on the bourses could be extended for another month if coal stocks at domestic coalbased plants do not improve.

The two plants have a combined capacity of 8,000 MW but were running at lower capacity in spite of ample imported coal stock.

Tata Power had backed down 3,200 MW and Adani 1,200 MW over compensatory tariff issues.

Switching on this capacity will allow base load stations to ease off so that inventories at other plants can be built up. It will also calm prices on the exchanges, which are averaging Rs 8 per unit against about Rs 3 a month ago. The prices have risen because of demand from states, who are forced to buy from exchanges as coal shortage hit power houses.

Central Electricity Authority documents show fuel stock at 73 coal-fired plants with a total capacity of 92,417 MW are critical or super critical. Six have ‘zero’ stock and running on daily supply, 13 have a day’s buffer, 17 have inventories for two days and13 plants for four days. The remaining have stocks for less than eight days.