ReNew Power lists in US via SPAC 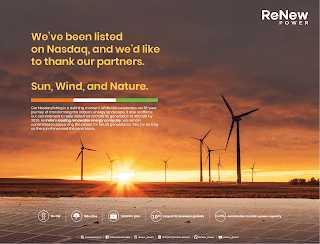 ReNew Power, India’s biggest renewable energy company, on Tuesday listed on the Nasdaq in the US through the special purpose acquisition company route and achieved a market capitalisation of nearly $4.5 billion (about Rs 33,500 crore). This is the biggest listing of an Indian entity through SPAC, the vehicle through which an Indian company could list in the US. At present, an Indian company cannot directly list on a foreign bourse.

On Tuesday, ReNew Energy, the UK-domiciled holding company for ReNew Power, started trading on the US exchange under the ticker symbol ‘RNW’. In early trades, the stock was quoted at $8.6.

Since under current rules an Indian company can’t directly list on a foreign bourse, the UK-domiciled ReNew Energy has been structured as the holding company for ReNew Power, the India-domiciled company that owns all the renewable energy assets in the country.

Although it’s a circuitous route to listing in the US, it is allowed under current laws.