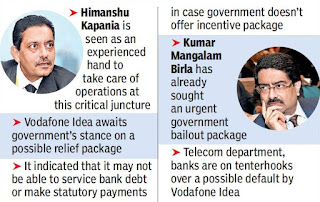 Kumar Mangalam Birla stepped down as non-executive chairman and a director from the board of telecom major Vodafone Idea as the company battles for survival amid severe financial strain.

Birla, who recently sought an urgent government package for bailing out the debt-laden company, will be replaced by trusted hand and telecom industry veteran Himanshu Kapania, who has been appointed as the non-executive chairman. Kapania comes in as a nominee of the Aditya Birla Group that has around 27% stake in the company.

“The board of directors of Vodafone Idea has accepted the request of Kumar Mangalam Birla to step down as non-executive director and non-executive chairman of the board from August 4, 2021,” the company said in a regulatory filing.

Besides, Sushil Agarwal, a nominee of Aditya Birla Group, has been designated as an additional director (non-executive and non-independent) with effect from Wednesday.

Notwithstanding the toplevel changes, troubles for Vodafone Idea continue and escalate with each passing day.

The company, which is the country’s third-biggest telecom company, has given clear indications that it may not be in a capacity to service bank debt or make statutory government payments in case the Centre doesn’t step in with an incentive package.

Birla’s appeal, through a letter to cabinet secretary Rajiv Gauba, pointed to a last-ditch effort to salvage the company ahead of a possible default.

Vodafone, the other partner in the company, has said it will not further invest through equity. Vodafone holds about 44% in the ailing Indian telecom company.

The news has sent the company’s stock prices tumbling. On Wednesday, it fell another 18.5% to close at Rs 6 on the BSE, when the sensex rose another 1% to close at a record high. It has crashed nearly 30% over the last few days.