In Less Than Hour From IGI, Catch A Transit Flight At Jewar 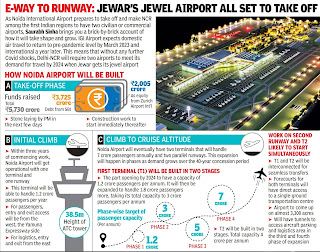 A 95-km ride between transit flights can be daunting. But in a few years, transit flyers from Indira Gandhi International Airport could board a rapid train to Sarai Kale Khan, then change to the Varanasi bullet train. A mere 21 minutes later, they could reach Noida International Airport to take their connecting flights. This is among the five connectivity plans the central government is drawing up for the upcoming airport at Greater Noida’s Jewar, 95km from IGI.

Arun Vir Singh, CEO of Yamuna Expressway Industrial Development Authority and NIA Limited said, “We will have an interchange from Eastern Peripheral Expressway for Yamuna Expressway, which is close to NIA. One segment of the Eastern Expressway goes to Uttarakhand, the other towards Manesar. IGI Airport will be connected to NIA via this link.”

He added, “We will also have an elevated road from the Delhi-Mumbai Expressway, of which 24km will be in Haryana and 10km in Uttar Pradesh. The two state governments are holding discussions on sharing the land acquisition cost. NHAI will carry out the construction. We will give road connectivity to Jewar from Delhi via Ballabhgarh.”

The proposed Delhi-Varanasi bullet train will be another link. According to Singh, the preliminary detailed project report has a bullet train station at the NIA terminal itself. The final DPR is being worked out. Additionally, the regional rapid transit system is planned between Sarai Kale Khan and IGI, opening up another connectivity between the two airports.

While no timeline has been set for the proposed Delhi-Varanasi bullet train, Rail Board sources said the National High-Speed Rail Corporation Limited has conducted a Lidar survey, or light detection and ranging, on the proposed route to examine the surface of the earth. “A straight-line route is necessary for trains travelling at 300kmph, so the scanning was done while preparing the detailed project report,” confirmed a source.

Depending on the Covid situation, the Noida airport is expected to become operational in around three years. The surface and metro links are likely to be ready by then. “Work has already started on the Noida airport site. Earth levelling is going on and a site office will come up shortly,” claimed Singh.

The biggest emerging concern as the National Capital Region gears up to be among the first cluster of cities in India to get a second civilian airport is the daunting 95-km gap between IGI and NIA for transit travellers, especially given Delhi’s choked roads.

This is a far cry from what Delhi has witnessed decades ago when commercial flights shifted from Safdarjung Airport to Palam in 1962. The approach road to IGI’s Terminal, when it opened in 1986, made driving a breeze in the congestion-free good old days.