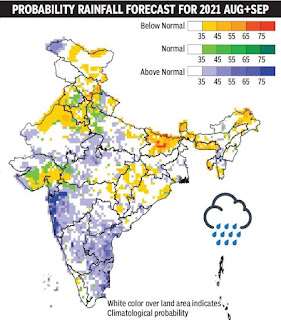 Seasonal rainfall across the country as a whole during the second half (August-September) of the monsoon is most likely to be normal with a “tendency to be on the positive side of normal”, the India Meteorological Department said in its updated forecast on Monday.

The forecast is almost in sync, barring aberrations in northwest India including Punjab, Haryana and Delhi, with what was predicted first in mid-April and later on June 1 about the southwest monsoon. The prediction will be reassuring as it holds the promise of growth in the rural economy at a time when several sectors have been hit by Covid.

The “normal” rainfall in August-September will help accelerate kharif crop-sowing operations which remained depressed during mid-June to mid-July due to the slow progress of monsoon towards northwest India and the overall “break” phase of rainfall from June 21 for nearly three weeks. Though the overall sown area has already crossed the threshold of “normal” acreage, the pace of sowing operations is now expected to bridge the gap compared to 2020 in coming days.

The weather forecasting agency said the overall rainfall during the next two months is most likely to be 95 to 105% of the long period average. The LPA of August to September rainfall over the country as a whole for the period1961-2010 is 428.3