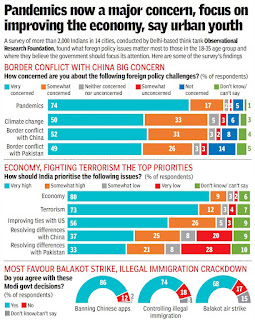 Covid-19 pandemic, terrorism, cyber-security and the Ladakh stand-off with China are the top foreign policy concerns of the Indian youth, shows a new survey.

The survey of the urban Indian youth by Observer Research Foundation finds that while the government’s decision on the Quad, China and Pakistan find huge support, there is a big thumbs down for the decision to walk away from RCEP.

Foreign secretary Harsh Shringla is expected to release the report on Independence Day. India may be a predominantly young country, and a rising international power, but has rarely captured the views of its youth on foreign policy issues. By and large, the respondents agreed with the Modi government’s foreign policy actions. But an overwhelming 80% believe the top foreign policy priority for India should be to strengthen its economy.

Other priorities are to fight against terrorism, build ties with the US, resolve disputes with India’s neighbours (not China or Pakistan).

Interestingly, nearly half of the youth surveyed are concerned about tackling climate change, something that would have been nothing more than a nerdy interest about a decade ago. Border conflicts with China occupy greater mind space (52%) than border conflicts with Pakistan (49%), an indicator of changing security perceptions.

Curiously, the respondents consider Sri Lanka as India’s most “trusted” neighbour (68%) — counter-intuitive, since Chinese challenge in the neighbourhood came via Sri Lanka besides also the Tamil question which has marked Indo-Lanka ties. Bhutan, India’s staunchest ally, came a lowly third, even lower than Nepal, which is surprising. Pakistan comes at the bottom with 10 per cent trust ratings.

The government’s decision to ban Chinese mobile Apps received an 86 per cent endorsement, Balakot air strike about 68 percent, almost the same as the Quad (64%).

Right up at the top after the Chinese Apps is “control illegal immigration”. It’s clearly an issue close to the hearts of young Indians, and could influence political choices.

Over 77 per cent of the respondents rated the US as the most trusted leading global power. The US was followed by Australia, Russia, Japan, France, UK and the European Union. The country that the respondents distrusted the most (77 percent) is China. Who will partner India in the years ahead? They said Quad, Russia and Europe, in that order.

China is causing as much concern among the young Indians as among governments. The survey said that it found 62 percent of respondents were of the view that India should abandon non-alignment in case of rising US-China tensions and ally with the US. The respondents expressed concern not only about China interfering in India’s neighbourhood, but also about its military and economic superiority. They also expressed fears of a breakout of war.

While those surveyed had definite views about India’s permanent membership of the UNSC, and were familiar with the World Trade Organisation, a surprising two-thirds had not heard of the Non Aligned Movement. India was one of the founders of this movement in the 20th century.

The study observes, “There is low awareness about more recent platforms and forums, such as the Bay of Bengal Initiative for Multi-Sectoral Technical and Economic Cooperation (BIMSTEC), South Asian Association for Regional Cooperation (SAARC), Group of 20 (G20) and Shanghai Cooperation Organisation (SCO).”