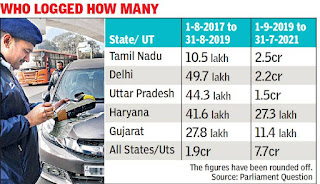 The number of challans for traffic rule violations has increased by almost four times to 7.7 crore in the past 23 months after the amended Motor Vehicle Act came into force in 2019 compared to the same previous corresponding period. Nearly 29% of these challans were issued only in Delhi despite it being a UT while Tamil Nadu had the maximum share of 32.5% of such challans in the past 23 months.

The data, submitted to the Rajya Sabha on Monday by Union road transport minister Nitin Gadkari in response to a starred question, shows that only1.9 crore challans were issued between August 2017 and August 2019 before the amended law was notified by the Centre. All states have implemented the new provisions with higher fines for traffic violations.

The total number of vehicles in Delhi is equal to the combined number of vehicles registered in Mumbai, Kolkata and Chennai. Uttar Pradesh also saw an increase in the number of such challans from 44.3 lakh to 1.5 crore after the new MV law was enforced. However, there are states such as Gujarat and Haryana where the number of challans reduced. Former DGP and chairman of road safety authority in Telangana T Krishna Parasad said, “It was expected that the number of challans would increase after the new law came into force. Had there been no lockdown and restriction on traffic movement, the numbers would have been bigger. We can see a spike in challans in states and cities where technology is being used to catch the violators. We must shift from policemen-driven enforcement to technology-driven enforcement.”

Gadkari said the increase in number of challans is due to installation of cameras and speed gun-based automatic violation detection system. He said this was almost negligible before the implementation of the amended law.