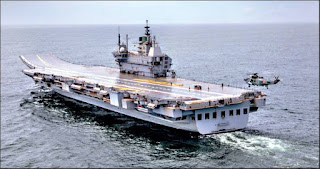 The much-awaited sea trials of India’s first indigenous aircraft carrier, which will be reincarnated as INS Vikrant once it is commissioned in August next year, finally kicked off on Wednesday.

Describing the launch of the maiden sea trials of the 40,000-tonne IAC as a “proud and historic day”, the Navy said India has now joined a select group of countries like the US, Russia, China, France and UK to have the “niche capability” to indigenously design, build and integrate a state-of-the-art aircraft carrier.

The IAC will become fully operational only after the flight trials of MiG-29K supersonic fighter jets, MH-60R multi-role helicopters and indigenously manufactured ALHs (advanced light helicopters) are completed from its deck by around mid-2023.

But once deployed on the high seas, the 262-metre long and 62-meter wide IAC will pack quite an offensive punch as a floating airfield with fighters as well as a wide array of weapons to project raw military power.

Built at the Cochin Shipyard for around Rs 23,000 crore with an indigenous content of 76%, the carrier was first sanctioned by government way back in January 2003. It has been designed for a crew of 1,700, with specialised cabins for women officers, and an operational endurance of around 7,500 nautical miles at a cruising speed of 18 knots.

The IAC will be christened INS Vikrant after the country’s first aircraft carrier, which was acquired from the UK in 1961, played a major role during the 1971 war and eventually decommissioned in 1997.

India currently has only one aircraft carrier, the 44,500-tonne INS Vikramaditya, inducted from Russia for $2.33 billion in November 2013. Another $2 billion was spent on procuring 45 MiG-29Ks to operate from its deck.

The Navy now wants 36 new multi-role fighters to meet the shortfall in the number of jets required for both INS Vikramaditya and IAC. The case for a third 65,000-tonne carrier, which has been pending since May 2015, is yet to get even the initial “acceptance of necessity” by the government.

China, meanwhile, is assiduously ramping up its naval presence in the Indian Ocean Region. Fast-tracking its aircraft carrier plans, China already has two carriers, Liaoning and Shandong, and is building two more towards its aim of eventually having 10 of them.

The US Navy, of course, has as many as 11 “super” 100,000-tonne carriers, each of which can carry 80-90 fighters. A `carrier strike group’ of an aircraft carrier and its accompanying warships is a self-contained and composite war-fighting machine, with inherent flexibility and mobility to shift to a new theatre of operations in 48 to 72 hours.