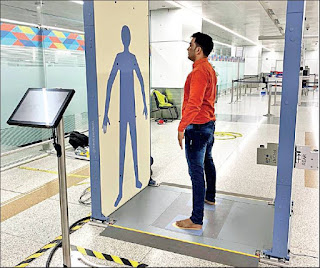 Full-body scanners, which were to be installed at Indira Gandhi International Airport by April 2020, could be made operational in the next couple of months if footfall continues to increase.

Central Industrial Security Force, which tested a German body scanner in February 2020, said out of two technologies — backscatter X-ray and millimetre wave technology — the latter had been selected owing to lesser radiation being emitted from it. However, the pandemic had delayed the installation, which was a “top priority” currently.

A senior CISF official said that the technology was considered after all possible faults from the testing phase as well as radiation concerns were addressed. Several adjustments were made and the final technology was approved by Bureau of Civil Aviation Security last year.

“It remains a top priority for CISF to cover all airports with this technology. Delhi and Mumbai will see installation first, followed by other airports. The technology has been approved and possible flaws have been fixed,” said the official. The scanners would be installed in coordination with the airport operator, Delhi International Airport Limited.

Another official, who was involved in the testing process, said an increase in footfall was required to begin installation as the move would not be economical for now. Last year, 69 “precise” body scanners were approved for installation at IGI Airport. Officials said the figure was unchanged, but fewer machines could be installed initially. “It will be expensive to install all of them at the moment as footfall is low. But we may begin the process soon,” added the CISF official.

A senior airport official said they had been coordinating with different agencies and meetings for body scanners were held even last year to finalise the installation process. “Covid-19 and closure of air operations slowed the process,” added the official.

In June 2019, BCAS had asked 84 major airports in the country to install body scanners in the next two years. However, IGI and five other airports had been asked to carry out the process by April 2020. In a notification, the specifications for each full-body scanner and the protocol to be followed with passengers were also issued.

In the tests carried out in January and February 2020, the new machine was found to be fairly effective in capturing minute details, but it faced problems in identifying items around the ankle. CISF said that problem was fixed later.

In 2017, CISF had carried out trials with a full-body scanner from the US. However, that machine had problems, particularly with women wearing sarees. Officials said the scanner was also unable to reliably detect items below the knee. Over 10,000 passengers were tested during this trial.

The current door-frame detectors would remain in place for wheelchair-bound passengers and those who cannot physically pass through the full-body scanners.