GST Collections Back on Track 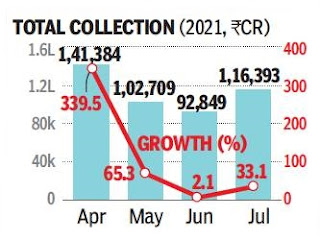 Gross goods and service tax collections topped ₹1 lakh crore in July after missing the mark the previous month, showing resumed uptrend in business activity and the economy as most states eased restrictions imposed during the second wave of the pandemic.

GST revenue collected totalled ₹1,16,393 crore the past month, the finance ministry said on Sunday, compared with ₹92,849 crore in June. From a year earlier, the proceeds were 33% higher.

The July collections indicate that the economy is recovering at a fast pace, the ministry said, adding: “The robust GST revenues are likely to continue in the coming months too.”

Experts also signalled stronger revenue numbers in August, with indicators such as e-way bills — required for the transportation of goods over ₹50,000 in value — recording an increase in July versus June. As of July 25, more than 49.5 million e-way bills had been generated, compared with 54.6 million in entire June. E-way bills reflect on revenue collections with a delay.

"In our view, this is further evidence that the graduated unlocking in June 2021 has triggered an incomplete recovery, which is expected to strengthen in July 2021, further boosting the August 2021 GST collections," said Aditi Nayar, chief economist at ratings firm ICRA.

In July, revenues from import of goods were 36% higher from a year earlier, the ministry said. Collections from domestic transactions, including import of services, rose 32%.

“The improvement in GST collections, accompanied by the fact that major producing states have shown significant increases, would indicate that the economic activities have resumed across the country,” said MS Mani, a senior director at Deloitte India.

The government had given a 15-day extension for the filing of returns for taxpayers with the aggregate turnover of up to Rs 5 crore in June in the wake of the second Covid wave.