Desis richest ethnic group in US 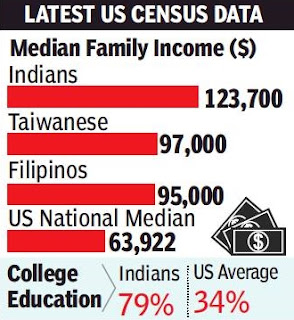 Indians in America, dubbed the “model minority”, continue their march to greater learning and prosperity, with the latest US Census showing them surpassing national metrics in college graduation and wealth by a wide margin.

The median household income of US Indians is now $123,700, almost double the national figure of $63,922. A massive 79% of Indians are graduates, compared to national figure of 34%, attesting to the emphasis on education in Indian families.

Indians comfortably outstrip even other Asian cohorts in the US in median household income with the next best communities, Taiwanese and Filipinos, coming in at $97,000 and $95,000, respectively.

Indians also have the least poor with only 14% reporting median family income below $40,000 compared to 33% nationally. A healthy 25% of Indian households reported an income of over $200,000 compared to the national figure of 8%.

This gap is wider among other Asian groups, suggesting that India sends its best and brightest to America, or that India’s so-called creamy layer is decamping or emigrating to the US, compared to less educated immigrants from other countries.

“People of Indian descent hold a significant share of jobs in several high-paying fields, including computer science, financial management and medicine. Nine percent of doctors in the US are of Indian descent, and more than half of them are immigrants,” a New York Times analysis of the data noted.

The report said the number of people who identify as Asian in the US has nearly tripled in the past three decades, and Asians are now the fastest growing of the nation’s four largest racial and ethnic groups. The number of counties where people of Asian descent represent more than 5% of the population has risen from 39 in 1990 to 176 in 2020. A Pew Research Center analysis of the data said the Asian population in the US, which currently stands at 23 million, is projected to reach 46 million by 2060.