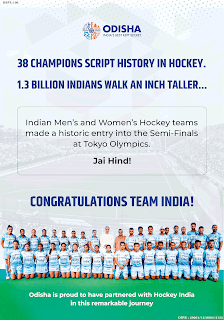 If P R Sreejesh shielded the goal with his life during India’s bronze medal-winning match against Germany, there’s another man who has played a silent role in guarding hockey’s interests in the country. Naveen Patnaik, the Odisha chief minister, patronised hockey at a time the game needed it the most.

Naveen was once a goalkeeper for his Doon School hockey team. It is that early love that led to his support for the game, which saw Odisha sponsor the men’s as well as the women’s teams right from the junior to the senior levels.

In 2018, when Sahara withdrew, Odisha signed a Rs 140-crore deal with Hockey India to sponsor the men’s and women’s teams for five years. That was also the year Odisha hosted the men’s hockey World Cup, which it will again host in 2023 in Bhubaneswar and Rourkela, where the state is building India’s largest hockey stadium for an estimated Rs 120 crore.

Moments after India’s historic win, Naveen spoke to some of the players in Tokyo over a video link. “Many congratulations to our team. The whole of India is so excited, as is Odisha, of course. We are all behind you and wish you the very best,” Naveen told them.

While Naveen earned plaudits for supporting hockey, nothing would have been more special than the appreciation he got from skipper Manpreet Singh. “We have finally achieved our dream of winning an Olympic medal. On this special occasion, I would like to express our special thanks to the chief minister of Odisha, Naveen Patnaik ji, who has supported us in this journey,” he said.

“His vision for hockey has helped us achieve this remarkable feat. While everyone was supporting cricket, the honourable CM chose hockey, and today you can see the result. I would like to say thank you so much, sir,” the captain said.

“More than his own love for the game, the CM is moved by the love the people of Odisha have for hockey. This is what inspired him to promote the game,” Odisha sports secretary R Vineel Krishna said.

Hockey in Odisha is more than a sport, it’s a way of life, especially in the tribal areas where it is said that children learn to walk holding hockey sticks. Odisha was the only state that had its own professional hockey team, Kalinga Lancers, which participated in the Hockey India League and emerged as champion in the last edition in 2017. The state has a system of sports hostels that has been providing hockey coaching to thousands, with some of them going on to represent India. Odisha has also hosted all the major international hockey tournaments held in India in the last few years.

The roadmap is ambitious. “To enable budding talent to practice on astroturf, the state is constructing 20 hockey training centres at a cost of Rs 200 crore. A professional coaching programme at the grassroots level will ensure that a large number of children get attracted to hockey and take it up as a career,” Krishna said.