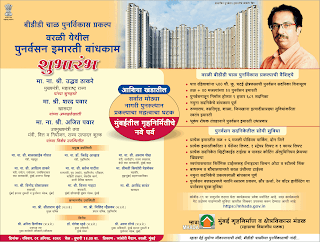 CM Uddhav Thackeray on Sunday appealed to BDD Chawl residents not to fall prey to the lure of selling the flats allotted to them in redeveloped towers. He was speaking at the bhoomipujan (foundation stone ceremony) of the BDD Chawl redevelopment project at Jamboree Maidan in Worli.

Thackeray performed the bhoomipujan, the second one for the project. The previous bhoomipujan at Jamboree Maidan was performed by Devendra Fadnavis when he was chief minister in 2017.

“Many martyrs who sacrificed their lives in the Samyukta Maharashtra Movement were residents of these chawls. We should remember them. Even if you move to the tower, do not disengage yourself from chawl culture and do not fall prey to the desire to sell your flats,” he said.

He said the state had built almost five lakh houses in rural Maharashtra through the rural development department and started alloting houses to mill workers.

NCP chief Sharad Pawar said residents should stay back in redeveloped houses and keep the legacy of the chawls intact.

There are 195 BDD Chawl buildings, with 80 tenements each, built between 1920 and 1925. After the redevelopment, residents will get a 500sqft flat.

Aaditya Thackeray, the local MLA, said the government will convert one of the chawls into a museum to showcase its legacy to the next generation.

Minister for housing Jitendra Awhad clarified that the bhoomipujan was not only for the Worli chawls but was a combined one for all three BDD Chawls at Worli, Naigaon and NM Joshi Marg.