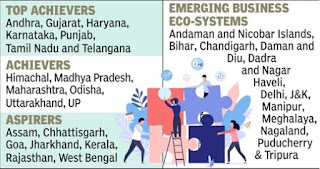 Andhra Pradesh, Gujarat, Haryana, Karnataka, Punjab, Tamil Nadu and Telangana have scored more than 90% in the central government’s ranking of states on ease of doing business.

The Business Reforms Action Plan 2020 report has changed the system of a simple ranking to a band of states in the same range of reform completion, and assesses them on 301 reform action points that improve investor confidence and access to government services for citizens. The last edition of the BRAP in 2019 showed Andhra Pradesh, Uttar Pradesh and Telangana lead the rankings.

“This shows that states are not averse to being rated in some way. Best practices are being adapted and industry feels that things are moving fast after the pandemic. Many of the steps that were taken up even before the pandemic stood the test of time even during the pandemic,” finance minister Nirmala Sitharaman said while launching the report.

The second band of states with 80-90% score comprises Himachal Pradesh, Madhya Pradesh, Maharashtra, Odisha, Uttarakhand and UP. The national capital territory of Delhi, along with Bihar and all union territories scored less than 50%.

In all, 108 new reforms and first-time reforms were assessed in telecom, movie shooting, tourism and healthcare sectors among others.

“Unlike the reforms of 1991, which were given to us for implementation, there is no compulsion now. The objective is to see what will bring out improvement in systems and ensure better lives for us. An element of nudge has been brought into every layer of the government,” Sitharaman said