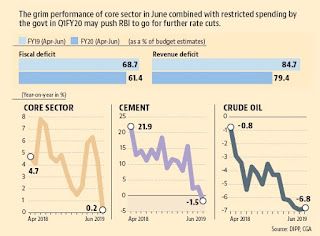 Growth in the eight key core sectors slowed to 0.2% in June, dragged down by a contraction in four segments and pointing to a slowdown for overall industrial growth.

The eight core sectors—spanning coal, crude oil, natural gas, refinery products, fertilisers, steel, cement and electricity—rose an annual 0.2% compared with 7.8% in June 2018 and lower than the previous month’s 4.3%. Growth during April to June was 3.5%, lower than the 5.5% posted in the year-ago period.

The core sector accounts for 40.2% of the index of industrial production and the slowdown in June will impact the factory output data for June, which will be released later in the month.

Economists said they expect overall industrial output growth to remain muted in June, which may prompt RBI to cut interest rates. Several key segments of the economy like automobiles are in the grip of a slowdown and pose a challenge for policymaker. RBI has cut interest rates three times in a row and changed its stance to accommodative from neutral, indicating more cuts if needed.

This was the lowest year-on-year growth since December 2015. For May 2019, core sector growth was also revised lower from 5.1% to 4.3%. The high base effect is likely to have a bearing on core sector growth in coming months. Owing to that, IIP is expected to grow in the range of 4.5-5% during FY20.

The monetary policy committee had noted in the June review that growth impulses had weakened significantly as reflected in a further widening of the output gap compared with the April 2019 policy.

A sharp slowdown in investment activity along with a continuing moderation in private consumption growth is a matter of concern, the MPC had said. Experts say that measures unveiled in the July budget will help boost growth.

The data showed that crude oil, natural gas, refinery products and cement contracted in June, pulling down overall growth. The electricity sector rose 7.3% during the month, compared with 7.3% in the previous month and 8.4% in the year earlier month. Since August last year, the sector has remained sluggish. 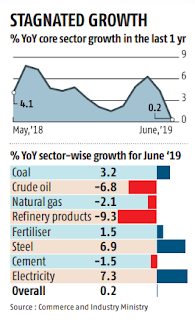