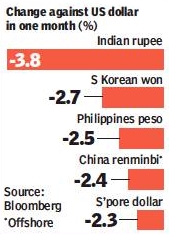 The rupee has emerged as the worst performing Asian currency in August, largely due to the decline witnessed on August 5 and August 13. The domestic currency has slipped by 222 paise, or 3.2%, since August 1. After closing at a six-month low of 71.4 on Tuesday, the rupee recovered 12 paise to close at 71.28 against the US dollar on Wednesday amid easing oil prices and gains in the domestic equity market.

Among the factors to be watched are firming up of inflation and any change in the tax laws for foreign portfolio investors, which could influence forex flows. FPIs have so far sold $1.6 billion in equities and net-bought $300 million in debt in August.

The rupee has come under pressure largely due to external factors. On August 5, it was triggered by a sharp weakening of the Chinese renminbi. On Tuesday, the rupee fell 61 paise on the back of an Argentine currency crash creating a scare among emerging market investors.

One positive development on the macro side was the improvement in trade deficit, which moderated to $13.4 billion in July since exports improved while imports fell further.