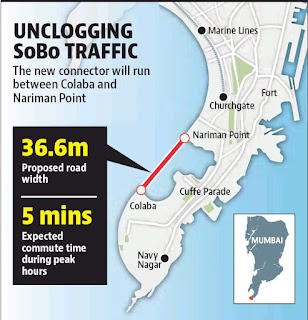 Brihanmumbai Municipal Corporation commissioner Praveen Pardeshi directed the coastal road department to ask its consultants about the viability of this project and suggest a suitable design.

The 36.6-metre-wide Colabanariman Point road finds mention in the city’s Development Plan (DP) 2034, along with the adjacent 300-acre Backbay Reclamation park that will be designed on the lines of New York’s Central Park.

Pardeshi, who met Shiv Sena leader Aaditya Thackeray and top civic officials on Friday to discuss the project, said it was part of the BMC’S plans to ease traffic woes in the island city.

“After consulting with fishermen from the area, studying its feasibility, and obtaining all requisite environment clearances, we will construct the road. This project has been stuck for some time and we want to bring it back on track,” said Pardeshi.

This drive usually takes around 45 minutes during peak hours.

Thackeray said this was the best way to unclog traffic in and around Colaba.

“But before we push for it, we have to check structural feasibility for something that has not been completed since 1986. We have to design a bridge that connects both ends without many pillars in the bay,” he said.