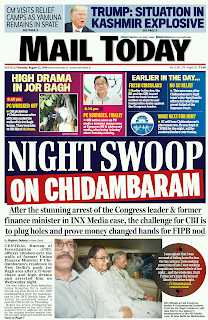 A day after the dramatic arrest of former Finance Minister P Chidambaram by the Central Bureau of Investigation in connection with the INX Media case, intense courtroom scenes dominated the better part of Thursday but brought no relief for him. The CBI was granted five-day custody till August 26 of the former minister for further interrogation, allowing him home food and medicines and a 30-minute window for interaction with his family on a daily basis.

Solicitor general Tushar Mehta, on behalf of the CBI, told the CBI special court that Chidambaram was being “non-cooperative” and “evasive” in the interrogation and that the agency needs more time to question him. The CBI sought five-day custody citing “enormity of evidence” against Chidambaram.

Chidambaram, despite having a strong team of senior advocates such as Kapil Sibal, Abhishek Manu Singhvi, Salman Khurshid and Vivek Tankha, failed to get a bail. His petition seeking protection from arrest by the CBI, which is slated for hearing in Supreme Court on Friday stands infructuous, while his other petition against the Enforcement Directorate is up for hearing on August 27. If the ED moves to arrest him after the five-day CBI custody gets over on August 26 and before the Supreme Court hearing on August 27, Chidambaram is likely to spend a longer time in custody.

As top legal eagles, who are also Chidambaram’s party colleagues from the Congress party, pressed for his bail in the CBI special court, Chidambaram too pitched in on his case and clarified that out of the 12 questions put to him by the CBI, one was on foreign accounts held by him and his son Karti Chidambaram on which the alleged financial transaction with Indrani and Peter Mukerjea took place. Chidambaram maintained that while he does not hold any such account, his son does have one foreign account that he holds with due permission from the Reserve Bank of India.

While presenting the facts, Sibal said that Karti, who is an accused in the case is out on bail, while Chidambaram senior is not even an accused. He also pointed out that no other Foreign Investment Promotion Board member has been arrested. Pressing for bail, Sibal said that Chidambaram had so far never missed any summons or avoided any interrogation, whereas it was the CBI that delayed the questioning in the case.

Opposition leaders, including those from the Congress, came out in support of former Union minister P Chidambaram, claiming the manner in which he was treated was depressing and insulting, and termed his arrest the “murder” of democracy.

Party chief spokesperson Randeep Surjewala said at a press conference, “The vindictive, selective and malicious manner in which former finance and home minister Chidambaram has been persecuted and prosecuted is nothing short of a brazen personal and political vendetta.”

West Bengal Chief Minister Mamata Banerjee said the arrest of Chidambaram was “depressing” and alleged that the judiciary was not coming to the help of a “crying” democratic system.

In her first reaction after Chidambaram’s arrest on Wednesday evening, Banerjee quoted Rabindranath Tagore and said the “message of justice is crying silently in isolation”. She also alleged that media outlets have become spokespersons of the ruling BJP.

Backing the former finance minister, DMK chief M K Stalin termed it a “political vendetta”, while the RJD attacked the BJP, claiming that all will be forgiven if you are with the saffron party. Stalin lashed out at CBI officials for scaling the walls of the Congress leader’s house on Wedesday to gain entry and said that he considered it an “insult to India”.

Meanwhile, Union Minister DV Sadananda Gowda rejected the Congress charge of “witch hunt” and abuse of investigating agencies over the arrest of P Chidambaram, saying there was no need for the BJP-led Government to resort to such things.