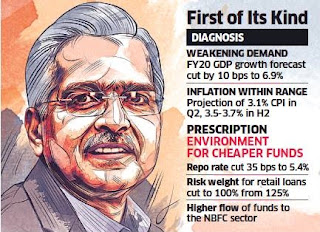 The Reserve Bank made a higher-than-expected reduction in interest rates as the monetary policy committee voted decisively to give the “highest priority” to economic growth amid a benign inflation outlook. But the unconventional quantum of reduction in the repo rate — 35 basis points (bps) — threw some market participants into a tizzy with future reductions becoming unpredictable. Interest rate changes are typically in 25 basis point increments. The cut brings repo rate to a nine-year low.

Governor Shaktikanta Das came up with a multi-pronged attack to lower rates for consumers by promising adequate liquidity and reducing cost of capital for banks by lowering risk weights for consumer loans, except credit cards.

The six-member MPC voted unanimously to reduce the rates, but two of the three independent members sought a cut of 25 basis points, while the remaining four wanted a lowering of 35 basis points. With the fourth reduction in the lowering cycle, the repo rate — at which the central bank lends to banks — is now at 5.4%. All other related rates were adjusted accordingly.

The RBI joins global central banks in reducing the cost of funds to beat an economic slowdown partly induced by trade wars and slowing demand in domestic economies. The US Federal Reserve reduced rates by a quarter point recently, but dampened expectations by highlighting that this was more a mid-cycle adjustment rather than the beginning of a lower-rate cycle. The central banks of countries such as Thailand and New Zealand have also cut interest rates.

In India, the slowest economic growth in five years is compounded by a credit squeeze in the financial sector with nonbanking finance companies facing a liquidity squeeze. Dewan Housing Finance Corp, Indiabulls Housing and Piramal Enterprises among others have cut down on lending to preserve cash.

Equity investors shrugged off the lower cost of funds as earnings continued to disappoint.

Risk aversion has led to the sale of automobiles and household goods being hit. With companies cutting costs, lenders are getting more reluctant to give consumer loans amid overall belt-tightening. But the RBI has promised to do its part to revive spirits. 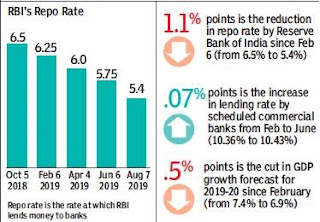