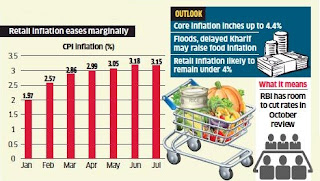 Retail inflation eased marginally to 3.15% in July following a sharp decline for fuel and light group, creating room for more interest rate cuts by the Reserve Bank going ahead.

Retail inflation, as measured by the consumer price index, was 3.18% in June. Inflation is likely to remain below the Reserve Bank of India’s target of 4% for the current fiscal, according to experts.

The RBI had cut rates by 35 basis points last week for a cumulative 110 bps this calendar year. One basis point is 0.01 percentage point.

There has been demand for a sharp cut in interest rates in view of low inflation to revive sharply falling consumer demand. Data released on Tuesday showed auto sales declined 31% in July.

Data released on Friday showed industrial growth at a tepid 2% in June.

Core inflation, which is inflation minus the volatile food and fuel components that is also seen as a measure of demand, inched up marginally to 4.4% in July from 4.3% in June.