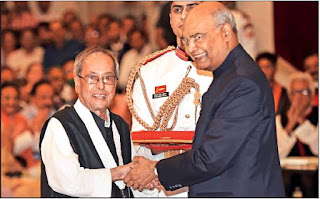 After receiving the honour, Mukherjee was greeted by PM Narendra Modi, Vice President M Venkaiah Naidu and several Union ministers and leaders present at the ceremony.

Even as Sonia and Rahul Gandhi were conspicuous by their absence, senior Congress leaders Ahmed Patel, Anand Sharma, Janardan Dwivedi and Bhupinder Singh Hooda were in attendance and congratulated Mukherjee after the award ceremony. The President also conferred the Bharat Ratna posthumously on Assamese singer Bhupen Hazarika and RSS leader Nanaji Deshmukh. Hazarika’s son Tej received the award on his father's behalf while chairman of Deendayal Research Institute Virendrajeet Singh received the Bharat Ratna on behalf of Deshmukh.

Hazarika, an acclaimed poet and filmmaker, was born on September 8, 1926, and died on November 5, 2011. He was responsible for introducing the culture and folk music of Assam and north-east India to Hindi cinema.

Deshmukh was born on October 11, 1916 in the small town of Hingoli in Maharashtra. He represented UP’s Balrampur constituency in Lok Sabha from 1977 to 1979. One of the founding members of Bharatiya Jana Sangh, Deshmukh established a chain of RSS-inspired schools throughout India. He was associated with the RSS till his death at the age of 94 in 2010.