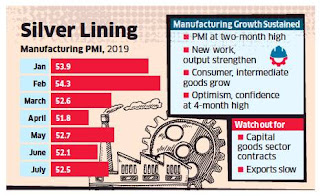 The Nikkei India Manufacturing Purchasing Managers’ Index rose to 52.5 in July from 52.1 in June, staying above the 50-point mark that separates expansion from contraction.

The stable manufacturing performance in July comes despite a dismal growth in infrastructure and sluggish car sales.

India’s largest car maker Maruti Suzuki reported a sharp 33.5% decline in sales in July. Automobile sales have been falling every month for almost a year, except for October, when the numbers were nearly flat.

Companies scaled up production in response to a quicker upturn in factory orders last month. This, aided by optimistic growth projections, underpinned job creation and an uptick in input purchasing. According to the report, producers faced a slight growth in input costs in July led by higher prices of steel, chemicals, cotton and freight but overall inflation stood at a three-month low.

The Reserve Bank of India is expected to cut interest rates for the fourth time in a row when its monetary policy committee meets from August 5-7.

Though manufacturing growth has recovered some momentum, it is still below the long-run trend levels.

Consumer goods led the upturn in July, as in the past two months, through a pickup in new orders, output and employment. Intermediate goods producers saw stronger improvement in business conditions.

Activity in the capital goods sector, however, contracted last month. “The capital goods sub-sector dipped into contraction, with lower sales causing reductions in output and quantities of purchases, while job creation came to a halt,” the study said.

Manufacturers’ confidence levels hit a four-month high in July with producers expecting a surge in demand through marketing efforts.

The demand optimism and bullish growth projections encouraged companies to loosen purse strings and hiring continued in July and additional inputs were purchased.