India will consume more electricity than US by 2045 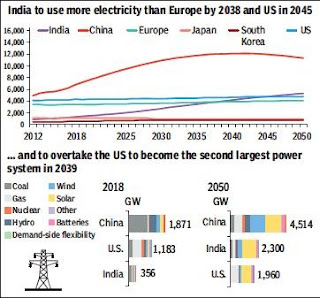 India will consume more electricity than Europe by 2038 and the US in 2045 as population expands and a sharp rise in GDP growth drives consumption by lifting more people out of poverty, according to ‘New Energy Outlook’ by Bloomberg New Energy Finance.

The outlook, scripted by Shantanu Jaiswal and Atin Jain, says demand will quadruple to 5,271 TWh (terrwatt hour) by 2050, largely driven by increased use of air-conditioners and electric vehicles. In step with the expanding demand, India’s 356-GW (gigawatt) power system will expand six times to overtake the US in 2039 and become the world’s second largest after China with an estimated generation capacity of 2,300 GW by 2050.

Power demand has been rising at a healthy 5-6% annually, driven by the Modi government’s push towards 24X7 supply, rural as well as household electrification programmes.