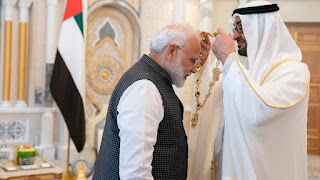 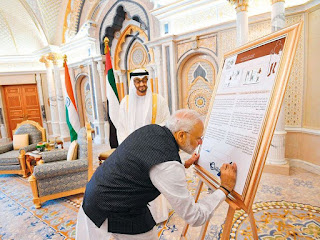 Cementing growing ties with UAE, PM Modi was honoured with the “Order of Zayed”, the Gulf nation’s highest civilian award, even as he told a local newspaper that revoking Jammu & Kashmir’s special status will end its isolation that led to radicalisation of the youth in the state.

Later in the day, Modi arrived in Bahrain, which honoured him with “The King Hamad Order of the Renaissance” as he held talks with King Hamad bin Isa Al Khalifa on various bilateral and regional issues. “This is a symbol of the close and friendly relations between the Kingdom of Bahrain and India,” the PM said.

The Order of Zayed award has earlier been bestowed on several world leaders. It was conferred by Abu Dhabi Crown Prince Sheikh Mohammed bin Zayed Al Nahyan at the presidential palace.

India and the UAE have emerged key partners, with the Emirates backing India on the world stage on crucial occasions. UAE and Saudi Arabia have been important breakthroughs, particularly in the context of Pakistan which has lost clout with these nations. Modi’s visit to Bahrain, the first by an Indian PM, after UAE engagements is seen in a similar context, given the kingdom’s ties with the Saudis.

In his interview, the PM, referring to separatism and radicalism, said, “We cannot afford to let these tendencies get any foothold in our harmonious society and distract us from primary tasks of growth and development of the entire country. I appreciate the understanding UAE and its leadership have shown for our steps and our reasons for taking them.”

Modi also launched the RuPay card here, making the UAE the first country in the middle east to initiate the Indian indigenous system of electronic payment.

On J&K, Modi in an interview said that the Centre’s move will end the isolation that kept J&K underdeveloped “to serve the vested interests of a few.” He asked NRI businessmen in Bahrain to direct their investments to J&K and Ladakh.