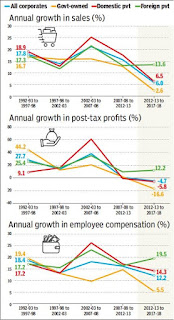 The period from 2013-14 to 2017-18 (both inclusive) has been the worst five year period for corporate India in the last 25 years. This is true for sales growth as well as profit after taxes. Not surprisingly, employee compensation too grew slowest in this period. This was true for both government-owned and private-owned domestic companies, though the pattern was slightly different for foreign-owned firms.

Analysing data from the Centre for Monitoring Indian Economy, an independent agency that tracks economic and business data, it was found that the average annual increase in sales revenue was 6% for the five years ending 2017-18 (the latest for which the relevant data is available). This was by far the lowest for any of the five-year blocks starting 1993-94.

Corporate sales in the five years between 2002-03 and 2007-08 saw an average annual increase of 21.2%, the highest for these blocks. Government owned firms saw the lowest annual increase in sales (2.6%) in the latest five-year period. In this period, the domestic private sector increased its sales revenues by 6.5% annually, while the corresponding figures for foreign-owned firms was 13.6%.

The five years till 2017-18 actually saw profit after taxes falling on average by 4.7% each year. Even the period between 2007-08 and 2012-13 had seen profits after tax rising by an average of 1.1% a year despite the initial years of this period being impacted by the global financial meltdown, which is an indication of just how bad the last five-year period has been.

Further slicing of the data shows that once again, the foreign private sector bucked the trend, its profits growing by a healthy 12.2% annually during this period. Government-owned firms were the worst sufferers.