Research had warned of floodline breach in Kolhapur 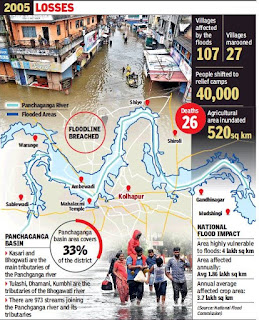 Researchers from Shivaji University, Kolhapur, had two years ago found that 17 villages along the Panchaganga and the two national highways passing through the western Maharashtra city were at “high risk” of flooding if the river overflowed. The 2019 monsoon proved them right.

Analysing the data and satellite images from the floods in 2005, Sachin Panhalkar and Amol Jarag of the department of geography at Shivaji University, Kolhapur, studied a total area of 615 sq km in Karveer, Hatkanangale and Shirol talukas for flood risk. Their paper was published in 2017 in Current Science, an English-language peer-reviewed multidisciplinary scientific journal. The findings were also shared with the local Kolhapur authorities.

For their study, the reserachers had considered the stream flow data and rainfall analysis of the Panchaganga river for 15 years (2000–2015). It showed that the rate of water discharge at 68,109 cubic feet per second was the highest on September 9, 2011. This was recorded at the Rajaram river gauging station.

During this same period, the region received the highest amount of rainfall (210 mm) within 24 hours at Wadange station on 26 July 2005. Taking into consideration these two parameters, the researchers had found that 133 villages in the central Kolhapur were prone to flood.

In addition, they had pointed out that the two national highways (Mumbai-Bengaluru and Ratnagiri), three state highways, 16 district roads, and some rural roads were in the high flood risk category.

Moreover, an additional 154 sq km area had a moderate risk of flooding. Most of this land was agricultural and 31 villages. Major national highways, state highways, district roads and some village roads were also included in moderate flood risk zone.

Researchers said proper zonation and planning was required to avoid losses during flood. However, rampant violation of the red line, poor dam water management had resulted in the current damage from the rain fury.

“The rules of red line have not been followed. There has been rapid urbanisation in these areas. Considering the intensity of rainfall over the past 15 days, the runoff in the catchment area has resulted in the current floods,” Panhalkar said.

He added that the current flooding in Panchganga is unlikely to reduce unless the Koyna dam discharge is stopped. “The water from Panchgangna, Krishna and Warana rivers converges at Narsobachi wadi, which is completely under water. The flow of the Krishna and Warana at that spot is so high that the Panchganga river is flowing back and inundating the adjoining areas,” he said.