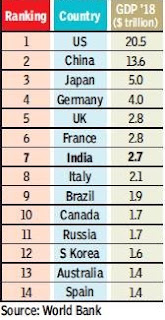 Economists said India taking the seventh largest global economy tag in 2018 was largely due to the currency fluctuations and slowdown in growth. “In 2017, the rupee appreciated against the dollar, and in 2018 it depreciated against the dollar. So, it is largely due to currency fluctuation and the growth slowdown,” said Devendra Pant, chief economist at India Ratings and research. He added that the ranking could change if growth picks up.

India still remains the fastest-growing major economy in the world, although growth is estimated to slow to 7% in the current fiscal year that ends in March. China is expected to face a sharper slowdown due to the ongoing tariff war with the US.

Last month, research firm IHS Markit had said that India will overtake the UK as the fifth largest economy in the world in 2019 and is likely to shoot past Japan to emerge as the third-largest economy by 2025.

The government has unveiled a plan to emerge as a $5 trillion economy by 2024-25 and the Economic survey for 2018-19 has said that the country needs to sustain a real GDP growth rate of 8% to achieve the goal.

While growth is expected to be in the 7% range in the current fiscal year, most economists and multilateral agencies expect it to gather momentum and push past over the 7% mark next year as the impact of the measures unveiled by the government takes hold.