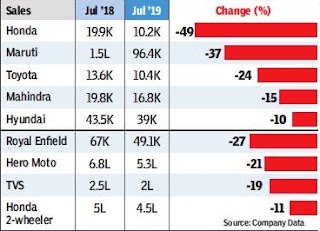 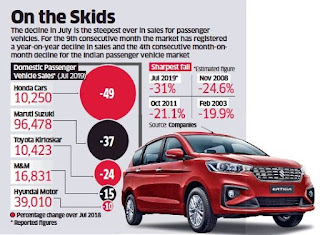 The pain in the auto industry has just exacerbated. Sales of cars and SUVs — that saw their worst quarterly fall since 2000-01 in the just-ended April-June 2019-20 period — crashed yet again as companies such as Maruti Suzuki and Honda saw some of their steepest declines in recent years.

The situation remains equally grim for two-wheeler makers where all the top players — Hero Moto, Honda Motorcycle and Scooter India, TVS and Royal Enfield — fell by double digits, clearly bringing out the pain in both urban and rural markets.

What is alarming for the industry is that this decline comes on an already-weak base. Sales of passenger vehicles (cars and SUVs) had started their downward spiral in July last year and save for October 2018, the numbers have been coming down every month since then. Also, the subdued sentiments in the market prevail even when companies are offering attractive discounts and freebies to lure buyers as the industry prepares for stricter BS6 emission norms from April next year.

For Maruti, which has been passing through one of its toughest periods as yet, the fall was a big 37% as the company saw a severe pressure on its portfolio of small cars. This was the sharpest single month fall for the company in nearly seven years, and analysts say that the decline for the car major will likely continue in the coming months too.

Buyers have been staying away from new purchases as a slowdown in economy, job losses in larger cities, and rural distress have dampened sentiment. Liquidity shortage has also made matters worse for the industry, which is now seeking a tax cut (GST relief) from the government to tide over one of its most challenging periods.