Domestic savings down to a decade’s low 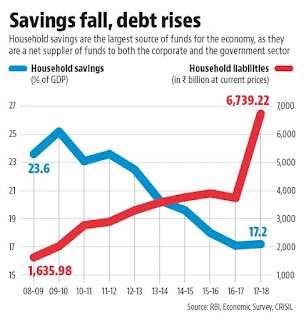 India’s household-sector savings, the biggest source of investment for the economy, have “worryingly” dipped to a decadal low, while retail loans to the sector are growing annually in double digits, pointing to profligate consumption by households, economists have warned.

Financial liabilities of households are mounting, which is not a good sign, experts say. The country’s savings rate, or the share of gross domestic savings in the GDP, has come down to 30.5% in 2018, data show, compared to nearly 37% in 2008. A boom in consumption, or spending on various goods and services, from electronic gadgets to holidays, is evident from the flow of retail loans to households, which are growing at a robust 17% annually. Credit or loans are fast shifting from the corporate world to the household sector because of India’s pile of corporate bad debt, known as the non-performing assets, or NPAS. For five years in a row, retail credit has been the fastest growing loan segment.

Household savings are the largest source of funds for the economy, as they are a net supplier of funds to both the corporate and the government sector. In any economy, investments are taken to be the equivalent of savings because income not consumed must be saved, which is then used for investment.

India’s investment needs are generally far larger than can be met by domestic savings alone. The shortfall is met by costly foreign savings, which is what the country’s current account deficit shows.

Poor savings have been a largely “addressed” reason for the country’s continuing slowdown, economist NR Bhanumurthy of the National Institute for Public Finance and Policy said. In the January-march quarter, the country grew at its slowest pace in five years at 5.8%.

Domestic savings are made up of corporate savings, public or government savings and household savings. Data from the Central Statistics Office show that it’s the household savings rate that has dipped the most. A country’s GDP denotes the value of all goods and services produced in a given period, the broadest measure of income and output.

Indian households, with a youthful population that likes to spend, have turned profligate in consumption, said rating company Crisil Ltd’s chief economist DK Joshi, adding 70% of the working-age population is aged between 20 and 40 years. The ratings firm, in a recent flagship report, called the scenario “worrying”.

To be sure, under India’s national accounting system, the household sector, apart from representing individual resident households, also includes small proprietorship farm and non-farm businesses among other constituents. This implies a savings crunch faced by millions of small establishments who are at the core of the informal economy.

Economists widely hold that a country’s economic growth should be investment-led rather than being driven by consumption, as has been the case with India.

On the other hand, households’ financial liabilities, as a share of their disposable income, have risen sharply. Latest Reserve Bank data show that household liabilities have increased from Rs.203,400 crore in 2009-10 to Rs.673, 900 crore now, an increase of over 200%.

Niti Aayog, the policy think tank, and the Economic Survey 2018-19, presented last month, have pointed to the need for raising investments and savings. “International experience, especially from high-growth East Asian economies, suggests that such growth can only be sustained by a ‘virtuous cycle’ of savings, investment and exports catalysed and supported by a favourable demographic phase,” the survey stated.

Referring to several well-established economic benchmarks, the survey said a “high investment effort must be backed by domestic savings”.

Diving household savings are not the only reason for India’s overall fall in gross domestic savings. “You saw very high growth in the 2007-08 period purely because of high savings. In fact, that was the only period when government savings were positive,” Bhanumurthy said.

Government “dissaving”, the act of the government tapping into its savings to finance expenses, also ‘crowds out’ or brings down private savings because such deficit spending by the government puts growth under pressure. This in turn leads to lower income and savings. An example of government dissaving, Bhanumurthy said, has been the rise in the share of revenue expenditure to total expenditure.