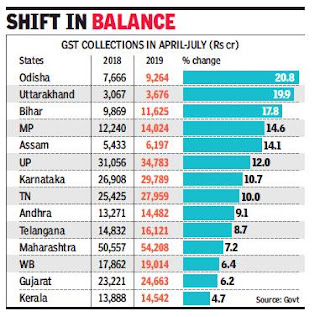 Consuming states such as Bihar, Odisha, UP and Madhya Pradesh — many of whom may be poorer but have large populations — are faring better in GST collections than their industrialised peers such as Maharashtra, Gujarat, Karnataka and Tamil Nadu.

Data accessed showed that West Bengal is among a handful of non-industrialised consuming states, which has not fared well during the first four months of the current financial year, when overall GST collections rose 9% to Rs.3.56 lakh crore. Among the major laggards was Delhi, which saw a 2% decline in mop-up, which was estimated at Rs.12,700 crore during April-July 2019, compared to a little under Rs.13,000 crore a year ago.

At the top of the heap are the states in the North East, led by Nagaland (39%), Arunachal Pradesh (35%), Sikkim (32%) and Meghalaya. But the overall collections for these states are between Rs.370 crore and Rs.680 crore.

Government officials and tax experts said the data showed the expected shift in balance towards the consuming states has started, a fear that had prompted Gujarat, Maharashtra and Tamil Nadu to demand compensation when the Narendra Modi government began negotiations for implementing GST. Later, the Centre got the BJP-ruled states to drop the demand.

Under the compensation mechanism, states with less than 14% annual growth are to be compensated by the Centre for five years and, going by the current trend, some of the poorer states do not need support. To compensate states, a cess on items such as soft drinks, tobacco and automobiles is levied.

Government officials said full impact is visible this year as the settlement of Integrated GST is happening regularly, unlike last year when it was delayed. “The distribution of the kitty is much better now and is benefiting the poorer states,” said an officer.

Experts, however, warned that those like Haryana and Punjab with lower populations may not do too well. In fact, Punjab could be adversely hit due to purchase tax and other cesses that it levied before they were subsumed into GST. Industry sources said Delhi has been adversely hit as the tax arbitrage on CST has ended. In the past, Delhi imposed a lower CST of 1%, resulting in many companies shipping goods from the Union territory by locating their offices here. CST is now history.