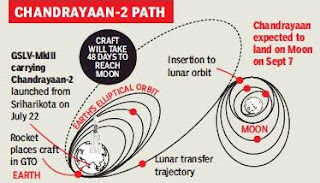 At exactly 2.21 am, Isro conducted the crucial ‘trans lunar injection’ manoeuvre of Chandrayaan-2 after the spacecraft’s engine was fired between 2 am and 2.20 am to make it enter a straight path to the lunar orbit. Chandrayaan-2 left Earth’s elliptical orbit after spending 22 days there post its launch from Sriharikota on July 22.

Isro said, “The health of the spacecraft is being continuously monitored from the Mission Operations Complex at Isro Telemetry, Tracking and Command Network in Bengaluru with support from Indian Deep Space Network antennas at Byalalu. Since its launch on July 22, all systems onboard Chandrayaan-2 are performing normal.”