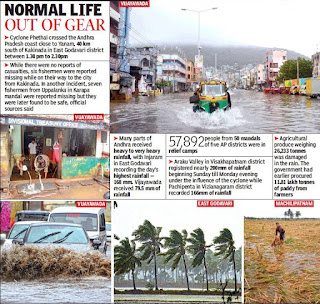 Cyclone ‘Phethai’ left a trail of damage in coastal Andhra Pradesh, affecting crops and bringing in heavy rainfall. Incidents of uprooting of trees and electric poles were also reported from the affected areas. One person was reported dead in a landslide in Vijaywada. The government declared two-day holiday in educational institutions.

The cyclone struck East Godavari district around 12.30 pm, resulting in heavy rainfall, coupled with winds with speed of up to 80 km per hour. Standing crops were damaged on more than one lakh hectares in coastal districts of East and West Godavari, Krishna, Prakasam, Visakhapatnam, Vizianagaram and Srikakulam.

Phethai had weakened before hitting Katrenikona coast in East Godavari. It is now moving in northeast direction towards Odisha. It is likely to develop into a deep depression. Krishna district collector B Lakshmi Kantham announced an immediate relief of Rs.50,000 to the family of the man who was killed in landslide. Meanwhile, two men and a woman reportedly died due to cold weather in Prakasam district. Phethai is the third cyclone to hit Andhra Pradesh in four months, after Gaza and Titli. The Real Time Governance Society issued instructions to the districts to be on alert till Tuesday evening. RTGS CEO Babu Rao said a total of 25,000 people were shifted to relief camps.