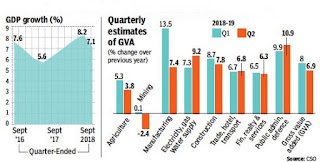 The country’s economic growth slowed in the September quarter, dragged down by a sluggish farm sector, a contraction in mining, moderation in manufacturing and slowdown in consumer spending.

The economy grew 7.1%, its slowest pace in three quarters, in the July-September quarter of 2018-19. GDP growth in the June quarter was 8.2%. The growth in the first half of the current fiscal year works to 7.6%.

India still retains the tag of the fastest growing major economy in the world as China’s growth in the same quarter was 6.5%. But some economists have marginally shaved off their growth estimates for the 2018-19 fiscal year and expect the economy to grow by 7.4%, similar to the estimates of the RBI.

The finance ministry said the second quarter notched up a reasonable GDP growth of 7.1% and the economy is on track to maintain a high growth rate in the current global environment. However, economic affairs secretary Subhash Chandra Garg said the September quarter GDP growth “seems disappointing”. The data comes against the backdrop of a raging debate over GDP numbers after a downward revision in GDP growth during the UPA era sparked off a bitter war of words.

Growth for the industrial sector eased to a 4-quarter low of 6.8%. The manufacturing sector has seen favourable performance in the second quarter, growing by 7.4% compared with 7.1% a year ago but it was the lowest growth in the last three quarters. Growth in the September quarter, the second quarter of the fiscal year, was powered by government spending, investments and exports but sharp growth in imports acted as a drag.

Economists expect some rebound in the second half.