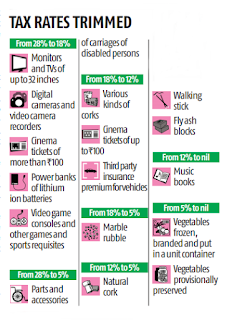 Cinema tickets, third party motor insurance, smaller TV sets, power banks, flights for Haj and Mansarovar yatra and branded frozen vegetables will get cheaper with the GST council slashing rates on 23 items. There are indications that rates will be pared for more items — including under-construction flats when the panel comprising Union and state finance ministers meets in January.

With the latest round of cuts, effective January 1, the government has reduced rates on nearly 360 items since GST was introduced almost 18 months ago.

There are indications that in the next meeting a simpler set of rules will be put in place for small-scale and medium-scale industries and small service providers.