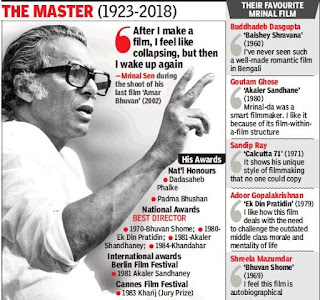 The legendary Mrinal Sen passed away at his South Kolkata residence following cardiac arrest. The 95-year-old filmmaker is survived by his son, Kunal. His actress-wife, Gita Sen, passed away in January last year.

As the third pillar of the triumvirate that included Satyajit Ray and Ritwik Ghatak, Sen narrated contemporary realities of life through his films and was one of the pioneers of the Indian new wave cinema.

Winner of innumerable national and international awards, Sen won the highest film honour, Dadasaheb Phalke award, in 2005. He was honoured with the Padma Bhushan, India’s third highest civilian award, in 1983.

The auteur made his first film Raat Bhore in 1955, with Uttam Kumar, and gained international recognition in 1960, with Baishey Shravan. Mrigaya (1976), which portrayed the plight of tribals in rural India, marked the debut of Mithun Chakrabarty. His 1986 directorial Genesis, featuring Naseeruddin Shah, Om Puri and Shabana Azmi, also told a story of slavery and freedom. His last directorial was Amar Bhuvan in 2002.

Born in Bangladesh’s (erstwhile Bengal) Faridpur in 1923 on May 14, Sen had arrived in Kolkata to study Physics at Scottish Church College and Calcutta University. After completing his education, he was forced to take up a job as a medical representative but he eventually returned to Kolkata to work as an audio technician at a city film studio.