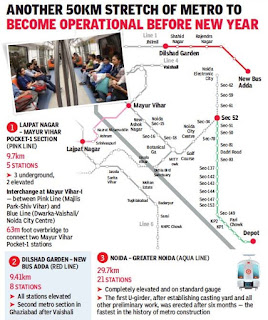 The Delhi Metro Rail Corporation has a New Year gift for you: By the end of this month, three new corridors — with a combined length of nearly 50 km — are likely to open, which will also mark the completion of the Metro’s Phase-III project.

Of these, the most eagerly awaited corridor is the 9.7 km Lajpat Nagar to Mayur Vihar Pocket-1 section of the 59-km Pink Line. It will bring the heart of south Delhi and its popular markets, such as Lajpat Nagar, Sarojini Nagar, South Extension and INA, closer to east Delhi.

The opening of this section will nearly complete the Pink Line, except for a 1.4 km missing link between Mayur Vihar Pocket-1 and Trilokpuri.

The other two corridors are the 9.4 km Dilshad Garden-New Bus Adda extension of Red Line and the 29.7 km Aqua Line of Noida Metro Rail Corporation, which will connect Noida to Greater Noida.

The Lajpat Nagar to Mayur Vihar Pocket-1 section of Pink Line will not only bring east Delhi closer to south, but also provide some much-needed connectivity to the Hazrat Nizamuddin railway station, the third busiest station in the city. Apart from Lajpat Nagar, this section will also have an interchange facility at Mayur Vihar 1, connecting the Pink and Blue lines. The two stations will be liked through a 63 m foot overbridge.

The Dilshad Garden to New Bus Adda section of Red Line will not only be DMRC’s second foray into Ghaziabad after Vaishali, but also connect interior parts of the city. This corridor will pass through Sahibabad Industrial Area and significantly impact residential areas in proximity. Connectivity to Mohan Nagar from Dilshad Garden will improve considerably too. The construction of this corridor was a major challenge as it runs along the busy GT Road, which has non-stop traffic through the day.

The Aqua Line of NMRC will provide connectivity to Greater Noida, even though it will not be seamlessly connected with the Delhi Metro network and commuters will have to change trains and buy separate tokens to use the two networks.