Fire breaks out at Aarey forest 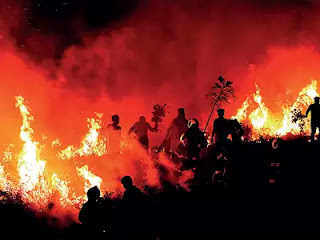 A fire broke out at Aarey forest near Infinity IT Park in Goregaon . No loss of life was reported till the time of going to press. “We have dispatched 10 fire engines and over a hundred personnel to the spot. A fully equipped emergency medical van is also on the spot to deal with any emergency,” said a BMC official.

The threat level of the fire, which was initially considered to be a minor one (level zero) when the fire brigade first received the call at 6:20 pm, was escalated to level two within an hour and later to level three. In fire brigade’s parlance, level three is the second-highest threat level, which is decided by the number of fire tenders sent to the spot.

Ramesh Narvekar, BMC’s disaster management chief, said that they have sealed a 3-kilometre periphery around the fire to ensure that neither people nor animals stray into the danger zone. “The fact that it is an isolated stretch of land makes it easier. However, it is also difficult for our vehicles to go there as it is a difficult terrain. Other than spraying water, the men are also trying out methods like using the green foliage of the nearby trees to control the fire,” he said.

Police from three police stations - Aarey colony, Dindoshi and Kurar - have been put on alert to deal with any emergency and help in evacuation of tribals living in nearby villages. While reports said the blaze was spreading towards MHADA colonies near Dindoshi and Goregaon east, fire officials said it was brought under control by night.

“As there was no approach way for fire equipment to reach the spot, the flames were brought under control with the help of fire beaters (branches of trees put together to create a barrier). In such cases, the wind causes rapid spread of the blaze. Four fire appliances and a jumbo tanker have been kept on standby at the spot till morning,” said Chief Fire Officer Prabhat Rahangdale.

The officer added that as of now, all visible flames have been put out, but splinters of trees are still smouldering.