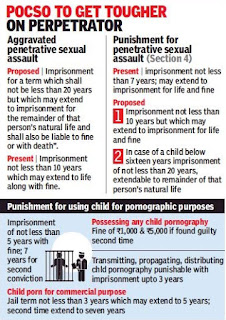 The Union Cabinet okayed amendments to add teeth to the 2012 Pocso Act and included death penalty for aggravated sexual assault on children. The Act defines child as any person below the age of 18 years Aggravated penetrative sexual assaults as of now invite a punishment of not less than 10 years that may extend to life along with fine. The enhanced punishment will also apply to any police officer who commits penetrative sexual assault on a child in police station premises, in the course of his duty or otherwise.

According to the law, members of the armed forces, security forces, public servants, and management and staff of jails, remand homes and protection homes guilty of such crimes will be up for the enhanced punishment.

Law minister Ravi Shankar Prasad said the amendments are required to “deter the rising trend of child sex abuse in the country”.

On why natural calamity situations have been included, the government has argued that children are often the worst affected by disasters.To check sexual exploitation, administration of hormones to a child to induce sexual maturity to enable sexual activity has been included in the separate “aggravated sexual assault category” which will invite a jail term of up to three years and fine. Possession and circulation of pornographic material involving a child for commericial purpose will invite not less than three years in jail, that may extend to five and can go up to seven years if convicted the second time.