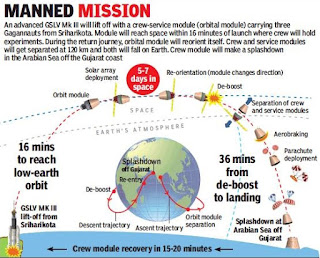 Giving a boost to India’s maiden human spaceflight programme, the Union cabinet has approved Rs.10,000 crore for the Gaganyaan project. Prime Minister Narendra Modi had fixed a 2022 deadline for the project during his Independence Day speech, earlier this year. “We will send a three-member crew to space for seven days. It will be in collaboration with industry, academia, scientific agencies, labs and stakeholders, along with Isro. We will try to launch the first test flight demonstration within 40 months after the budget approval,” law minister Ravi Shankar Prasad said.

The manned mission will help India become the fourth nation after Russia, US and China to send humans to space. “Isro has taken up the challenge and we will meet the PM’s 2022 deadline,” Isro chairman K Sivan said.

We have been (informally) working on the project for the past four months. I have set up a team to work on the design for the mission. This work will be over by January,” the Isro chairman said.

On training of astronauts, Sivan said, “With the budget cleared for the mission, we will now work seriously on training schedule of the crew, including foreign training, if needed.”

On crew selection, the chairman had recently said, “The spacesuit is ready. The crew members will be jointly selected by the IAF and Isro after which they will be trained for two-three years. We will send them to a training facility in Bengaluru. We are also consulting Rakesh Sharma (first Indian cosmonaut to go to space in 1984) for the mission.”

Till date, Isro has spent Rs.173 crore in developing critical technologies for the human spaceflight programme. Critical technologies needed for HSP include a crew module, crew escape system and environmental control and life support system. An advanced version of the GSLV-MkIII is designated as the launch vehicle for the mission. On July 5, Isro had carried out a crucial pad abort test when a 12.5-ton crew module was tested to make sure the crew could be rescued safely in case of an accident on the launchpad.

Recently, Sivan, accompanied by minister of state for atomic energy and space Jitendra Singh, had made an elaborate presentation in Delhi on the mission.