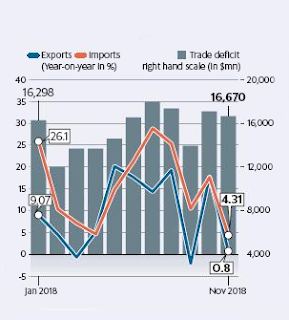 Growth in India’s merchandise exports slumped to 0.8% in November from 17.86% in October, the result of an unfavourable base effect, as the trade deficit narrowed benefitting from a sharp fall in crude oil prices.

Imports grew at 4.3% while the trade deficit fell to $16.7 billion in November.

A double-digit contraction in exports of gems and jewellery and engineering goods in November weighed upon the performance of non-oil exports.

A contraction in imports of gold and precious and semi-precious stones, transport equipment and pulses offset a portion of the rise in the crude oil import bill.

With oil prices falling by over 30% since October, India’s external outlook is expected to improve.
However, a decision last week by the Organization of the Petroleum Exporting Countries (Opec)
and some non-Opec producers, including Russia, to cut supply by 1.2 million barrels per day has supported prices this week.

That said, with an impending global slowdown and higher oil production in the US, the upside to oil price rise seems to have been capped.

While ratings agency Icra Ltd now estimates the CAD at 2.6% of GDP, Bank of Baroda has projected the figure at 2.5%. The International Monetary Fund, or IMF, has said that India’s CAD is expected to widen to 2.6% of GDP in 2018-19.

However, at current levels it is much narrower than the near 5% of GDP seen during the taper tantrum of 2013.

Data released by the Reserve Bank of India showed an 18.8% expansion in services exports in October, which partly benefited from a weaker rupee, contributing to a robust 23% rise in the services surplus.

In a report on India’s exports published as part of an economic strategy for the next government, economists Gita Gopinath and Amartya Lahiri said constraints to growth in exports appear to be generalised due to low scale of production, low productivity and institutional frictions.

They said the ongoing reset of the China-US trade relations may be an opportunity.

The corresponding export share of the much-celebrated Indian service sector rose from 0.5% to 3.4% during this period.

To put these numbers in context, over the same period the Chinese share of world merchandise exports rose from 1.8% to 12.8%.