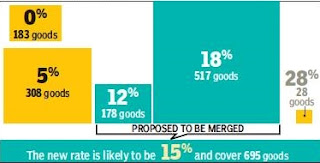 Finance minister Arun Jaitley said the Centre and states were close to completing the first stage of GST rationalisation by removing most items from the 28% slab with a convergence of the 12% and 18% brackets being the next step in the process.

He said the next priority was to lower the levy on cement from 28% to 18% and added that “the sun is setting on the 28% slab”. Although the minister, who heads the GST Council, did not elaborate on what the converged “standard rate” would be, he said it could be some mid-point between the two.

For long, tax practitioners and economists have suggested a 15% rate but it may still be months away with Jaitley saying it would take a reasonable time “when taxes rise significantly”.

A committee under former chief economic adviser Arvind Subramanian had suggested a revenue neutral rate of 15-15.5% but then went on to recommend that there should be two standard rates of 17-18% for most goods and services and 12% for items consumed by the poor. The GST Council went by this recommendation while deciding the slabs.

Once a decision is taken, officers will have to make a tough choice of finalising the rate as there will be a lot of heartburn for goods and services where the levy will be increased from the current 12%.

But it will result in three rates of zero, 5% and a standard rate with the top slab covering luxury and sin products. Several luxury and sin goods, such as tobacco products, pan masala, soft drinks, cars and SUVs also face a compensation cess, resulting in a higher levy.

The statement of intent came in a blog amid the opposition’s demand for an overhaul of the 18-month-old indirect tax mechanism amid accusations of a “flawed” GST regime. Jaitley hit back at “illinformed and motivated criticism” from the opposition, led by Congress president Rahul Gandhi. “Those who oppressed India with a 31% indirect tax and consistently belittled GST must seriously introspect. Irresponsible politics and irresponsible economics is only a race to the bottom,” he said.

Jaitley also pointed out how the GST Council had been a successful experiment where the Centre and states came together. “The political noise outside is inconsistent with the harmony inside the council,” the minister said.

While listing out the gains that included lower rates, convergence of 17 levies and multiple taxes and cesses into one and an end to border checkposts, Jaitley said, “Lower rate of taxes, increased tax base, higher collections, easy for trade and least interface in assessments with a significant part of the tax rationalisation over, the growth percentage in the years to come will increase. The transformation has been done over a period of 18 months. Any abrupt transformation could have been either detrimental to revenue or to trade,” the finance minister said.

The minister said that despite the stiff ask of an annual 14% increase in collections, which was guaranteed by the Centre, six states had achieved the target, while another seven were within striking distance of achieving it. “The requirement of compensation cess in the second year is expected to be much lower than the first year. This increase in the tax collection has to be factored keeping in mind the significant rate reduction which has taken place in the GST,” he said, adding that the revenue forgone was to the tune of Rs.80,000 crore through GST rate cuts.