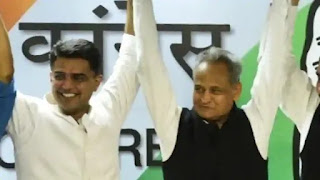 Both left for Jaipur soon after the decision was reached to hold the Congress Legislature Party meeting to confirm the decision. A party delegation thereafter met the state governor with Gehlot staking his claim to form the government.

Gandhi took the decision after taking into account the views of newly elected Congress legislators and after due deliberations with many party leaders, AICC observer KC Venugopal said at a briefing, where he was accompanied by Gehlot and Pilot.

“The Congress government will fulfil the election promises such as farmers’ loan waiver, job generation and will also build many infrastructure projects for the state,” Gehlot said. The new CM is also expected to roll out a slew of welfare schemes, something he has done in his previous tenure.

Pilot appeared to have overcome the rancour that had broken out between the two factions, with his supporters allegedly resorting to violence on Thursday. “Me and Gehlotji have worked our magic on the people of Rajasthan,” Pilot said. “We will meet the governor today and decide on the details of the oath-taking ceremony.”

Both leaders profusely thanked Gandhi, other party leaders, elected MLAs and party workers and vowed to rise to their expectations. The infighting had delayed the Congress party’s selection of chief ministers in Rajasthan, Madhya Pradesh and Chhattisgarh, after wresting the three states from the Bharatiya Janata Party in recent elections. Kamal Nath was chosen as Madhya Pradesh chief minister on Thursday.

As per the strength of the Rajasthan assembly, the Gehlot ministry can have a maximum of 30 ministers. Taking into account the caste equations of the state, the chief minister may give proportional representation to the Jat, Brahmin, Meena, Rajput, Dalit, Gujjar and Bania communities. Tentatively, the oath-taking ceremony is slated for December 17. Given the preponderance of Gehlot loyalists among the elected MLAs, his camp is bound to get the larger share of ministerial berths with Pilot reportedly keen to keep either the finance or home portfolio for himself besides ensuring ministerial berths for seven-eight of his backers. The All India Congress Committee announcement triggered celebrations among party members, with the supporters of Pilot also seemingly happy with the power-sharing arrangement.